I wrote this post one day last Fall, but never published it. However, I think of that day often and how different it could have turned out. I think about how life is short and to enjoy each day with my dogs... 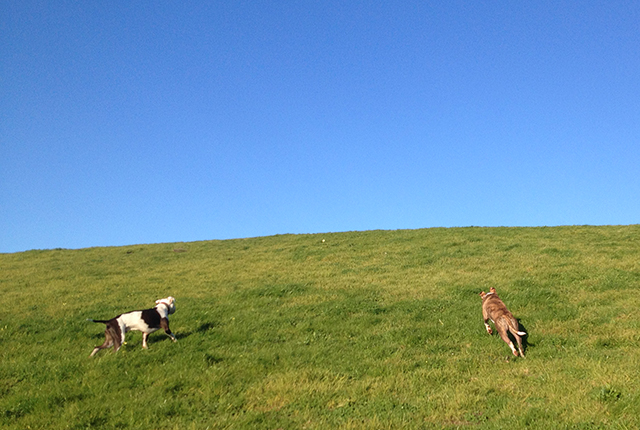 I almost lost my Little Baby today. I am forever grateful that this turned into a crazy story instead of one of the worst days of my life.

I've been spending some time at my mom's house in Tahoe and unlike my tiny backyard in Oakland, here Kaya & Norman have a big backyard which they love to run around, play and wrestle in. They'll spend the entire day tearing around out there and they get up way earlier than they do at home, making a beeline for the back door first thing in the morning. This summer they have gotten the chance to bond with my mom's dog, Zoey. Zoey has severe dog aggression but for some reason she's decided Kaya & Norman are fine by her. She loves going on hikes with them, playing fetch with Kaya and she doesn't even mind having them in the house or yard with her. I carefully watched them for weeks and she seemed to always enjoy lying on the sidelines while they run and play, so I finally started leaving them alone outside as long as we were home.

This morning, my mom and I were inside upstairs and the dogs were out back playing as usual, but we had the screen door open so we could hear them. All of a sudden there was a high-pitched scream coming from one of the dogs. I immediately thought, Oh my god, Zoey finally went after one of them. And being that she is a 90-pound German Shepherd it would not be pretty. I ran outside and quickly looked over the deck, I was shocked when I saw Kaya & Norman locked onto each other in the middle of the yard while Zoey was nowhere in sight. One of them was still screaming but I couldn't tell who.


As I ran down the steps, something in me knew not to yell out to them. They've never even shared a sideways glance at each other, there was no way they were fighting. There was something very wrong.

As I got close, I realized that Norman had his lower jaw caught in Kaya's collar. Both of them were terrified, trying to get free. They were pulling in opposite directions which was making it so much worse. The collar was completely wrapped around Norman's mouth, like a figure eight and it was digging into his gums. The other part was slicing into Kaya's neck, cutting off her breathing. I dropped to the ground, held onto each of them and did my best to calm them down. They were both completely panicking as I repeated shhhhhhhh over and over. It took about a minute to calm them down, but it felt like a lifetime. A couple times, they calmed down and then panicked again. Kaya had on a regular nylon collar with a plastic quick release so I tried to release it, but it was pulled so tight, it wouldn't budge. And Kaya was still screaming. She sounded more like a child than a dog.

My mom called out and I asked her to bring scissors. A neighbor heard the commotion and ran over to our fence. He tried to offer help. My mom tried to cut the collar but she couldn't even fit the scissor under it without cutting into her neck. Kaya had stopped screaming by now and both dogs were holding still, but time was ticking. Norman's gums were bleeding and Kaya was being strangled by the collar. I had to get the collar off right away so I tried once more to release the plastic buckle, but it was so slippery from their rough play in the wet grass. And the pieces were pulling so hard in opposite directions, that it was near impossible to press. Thankfully, it eventually worked and her collar was off, but she fell to the ground like a dead weight. She wasn't breathing. Her gums were blue and she wasn't responding. I kept calling her name, patting her on her side and shaking her like I was trying to snap her out of it.

And so I sat there, in my pjs and bare feet in the muddy grass, holding my dying dog. In that moment, as chaotic as it was, I had this split second vision that this would be her last day and we would be burying her today. I saw a blur of our whole crazy first year together, all the cuddles and adventures, all the playtime and training, the frustration and love. I didn't want them to turn into fleeting memories of the dog I never got to watch grow. 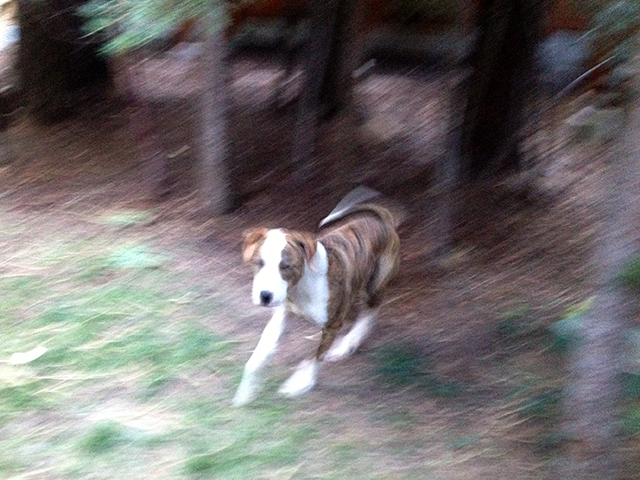 Both my mom and I were both in shock so thank god our neighbor, who was still watching from outside the fence, said to breathe into her nose. I did it 3 times and each time the air seemed to go right back out of her mouth. I tried again and again. Her eyes started to move around a little bit, but she still didn't seem to be breathing. I thought it might just be a weird reflex. I did it a few more times, her eyes were moving more, then she started to choke and gasp for air.

It was the biggest relief when I could see her chest rising and she was breathing again. It took her a couple minutes to recover, but she seemed just fine. My mom brought her some water. Her neck was raw and cut up a little. Norman had left the scene a soon as the collar was free. He was nervous and confused. I called him over and he gave Kaya a kiss and she kissed him back, but he was eager to walk away again. He was definitely more shook up than Kaya. I think he felt like he was in trouble and had done something really wrong. I kept re-assuring him that everything was okay and gave him lots of hugs. Even Zoey came over to check on Kaya and shared some water with her, I haven't seen Zoey do that since she was a puppy about 9 years ago. 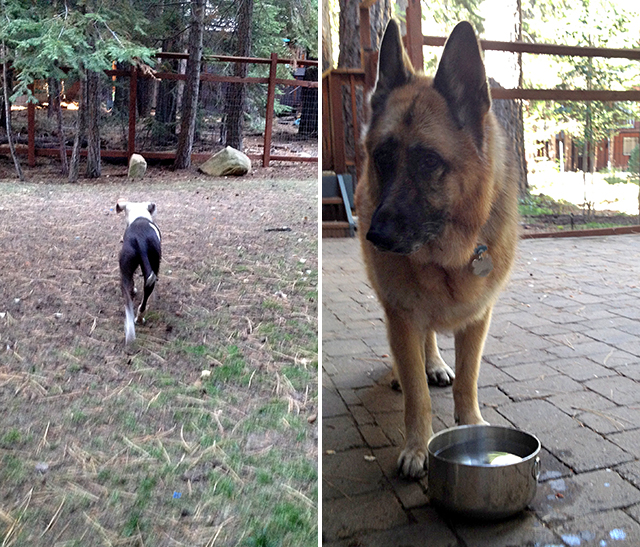 We brought them up to the deck and in typical Kaya fashion, she wasn't even phased. She was standing there wagging her tail and I had to tell her to lie down. She gave me a look like why the heck would I lie down when there is so much fun going on our there without me? She finally gave in and chewed on her bone.

Norman was still a bit concerned though. He kept to himself for a little while which was so sad. I've never seen him act that way before.


They took a short nap and then it was business as usual...hiking, swimming and just being dogs again, like it never happened.

It was a lesson learned, I will never let them play with their collars on again! And though I always thought it was for their safety to have their tags on when outside or home alone, I won't ever leave them alone with their collars on again. I can't even imagine the scene we would have found if we weren't there when this happened:( That being said, I am so proud of my dogs for not turning on each other when they were so frightened and in great pain. And I'm so relieved that they were able to trust me enough to calm down and let me help them when all their natural instincts probably told them to keep trying to separate. 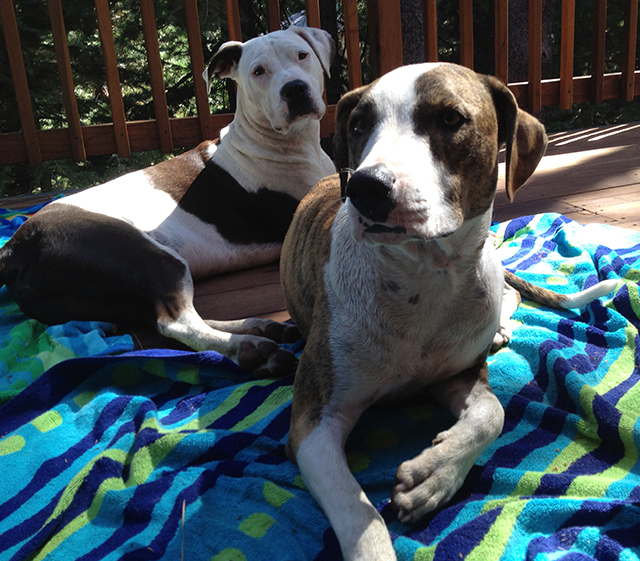 I don't know what we would do without Kaya in our lives. Norman would be so so sad if something happened to his big sister, his partner in crime, and his very best friend. Being the dare-devil that she is, I would not be surprised if this wasn't Kaya's last brush with death, but I really hope it is!

Though Kaya and Norman's play style, personalities and connection remained the same as always, a few days later, Kaya's neck wounds started to show. I put some neosporin on them, but she never seemed to mind and they healed quickly. Much quicker than the images burned in my memory.

Has anyone else had any close calls with their dog?