Norman's DNA results finally came in! The puzzling thing is that the breeds that showed up are actually exactly what I would think Kaya's would be. I even double checked that it was his test results and not hers. I am happy to report that Norman is at least 1/4 Pit Bull(Am Staff). He is also 1/4 Vizsla and 1/8 Bull Terrier. The rest is mixed breed. 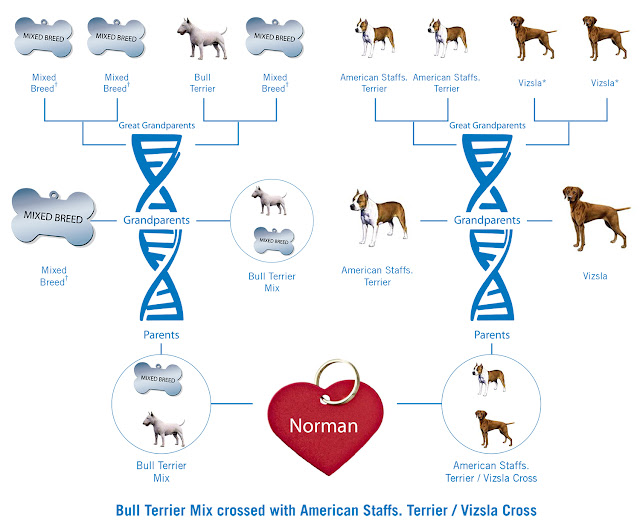 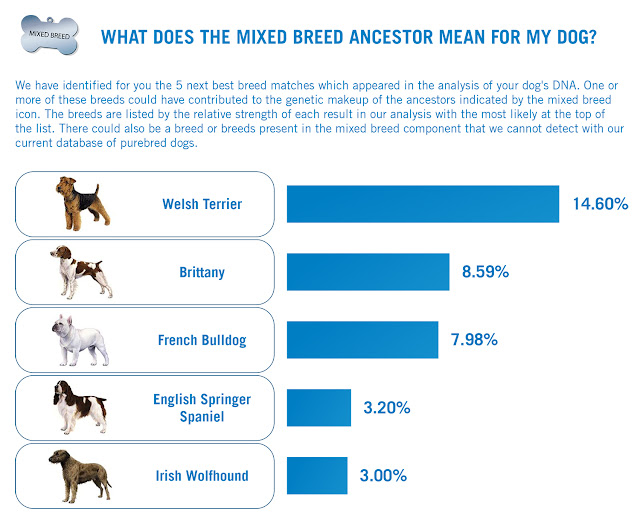 Interestingly, I don't think the main traits Wisdom Panel lists for each breed relate to Norman at all. 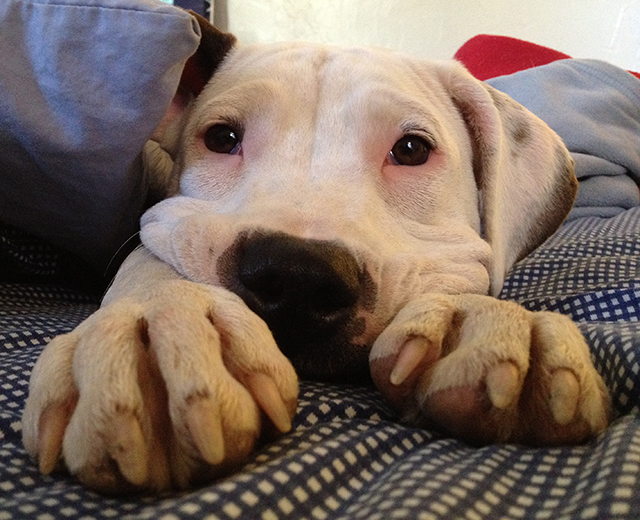 
Very loyal to family and usually good with children. May not get along well with other dogs. - YES & NO (Norman adores children, but he also adores every living thing on the planet earth and would probably go home with any stranger who says hello to him. He loves other dogs too.) 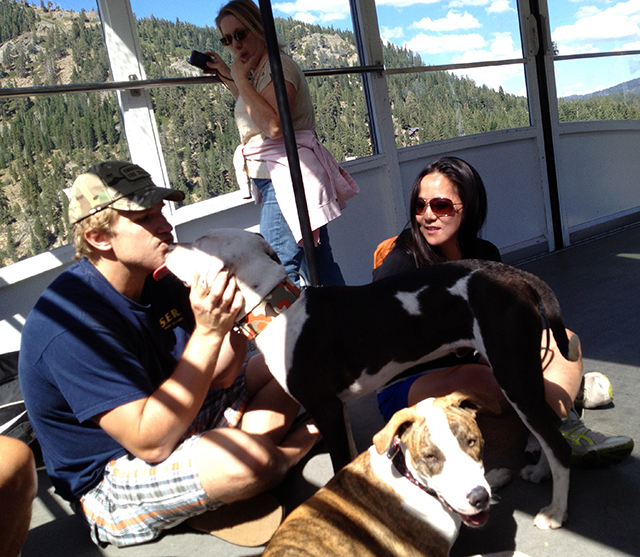 There have been reported incidents of American Staffordshire Terriers being aggressive with other
pets or people. - HELL NO


Though it is not described by Wisdom Panel, we all know that Pit Bulls are also known to be very affectionate, willing to please, goofy and wiggly which he certainly is. 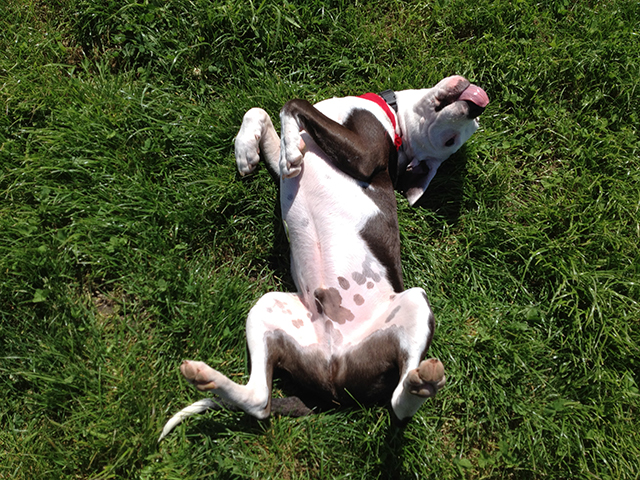 Energetic, alert, intelligent, and active dogs who may be exuberant. Good swimming or jogging companion. - NO 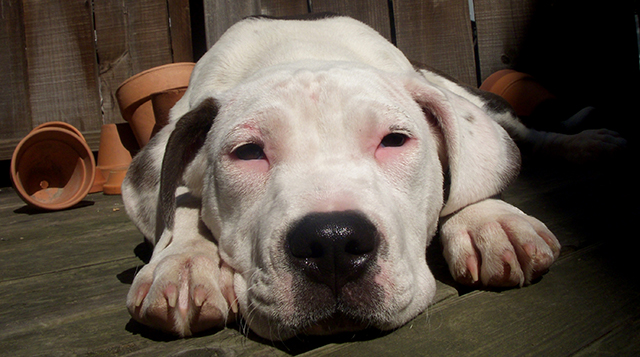 May be shy around strangers. - NOOOO 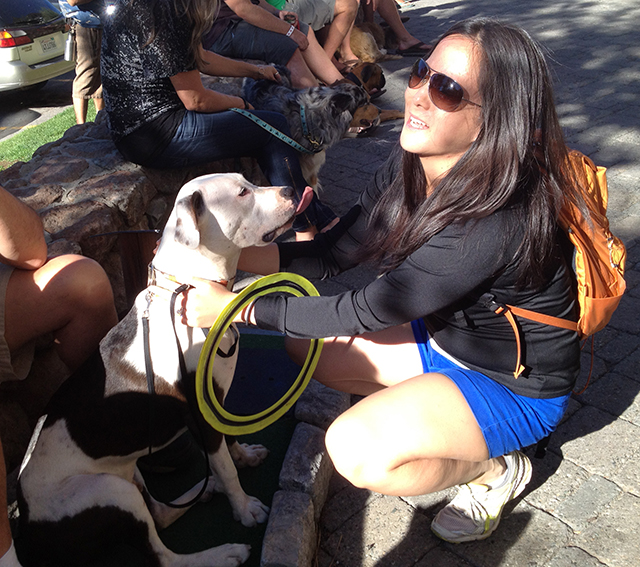 Like dog sports such as retrieving, flyball, Frisbee, hunt and field trials, agility, tracking, and obedience events. - NO 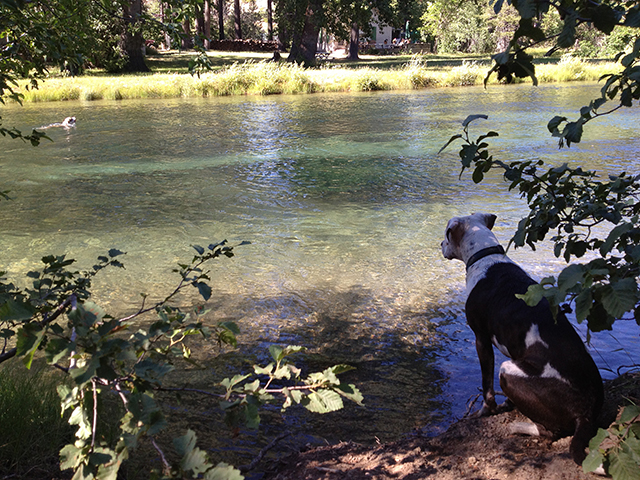 May chase or hunt wildlife or bark. - NO 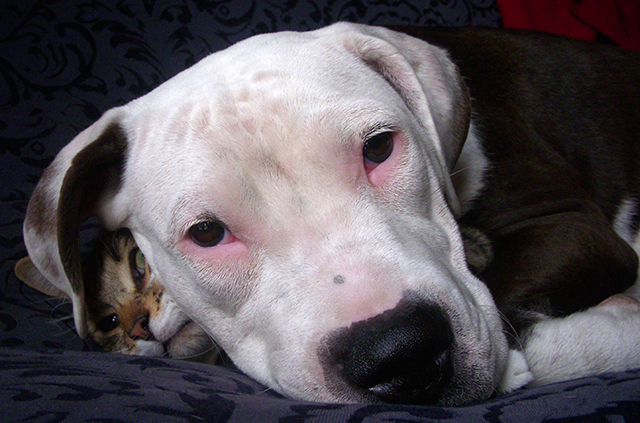 I did find some similarities on Wikipedia though:

Vizslas are gentle-mannered, loyal, caring, and highly affectionate. They quickly form close bonds with their owners, children and even strangers. Vizsla thrives on attention, exercise, and interaction. However, they must be trained gently and without harsh commands or strong physical correction, as they have sensitive temperaments and can be easily damaged if trained too harshly. Vizslas are very gentle dogs that are great around children. The Vizsla wants to be close to its owner as much as possible. Many Vizslas will sleep in bed with their owners. 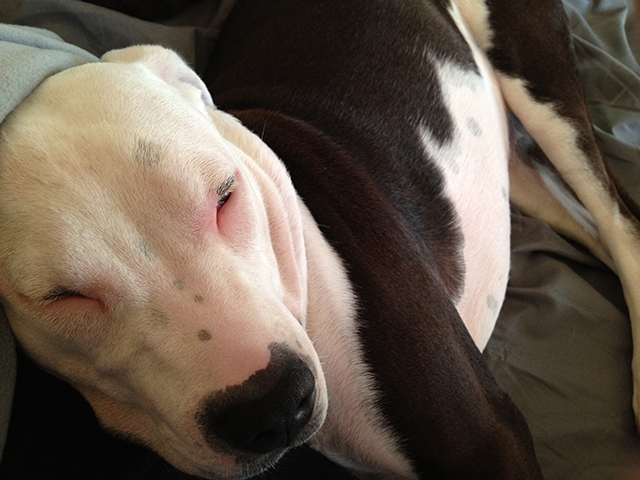 Vizslas are very high energy. They are very vocal dogs, and some will gladly "sing" along to the radio. Whenever these dogs feel neglected or want something, they will cry. They are natural hunters with an excellent ability to take training. They will retrieve on land and in the water, making the most of their natural instincts. Like all hunting dogs, Vizslas require a great deal of exercise to remain healthy and happy. Vizslas have been compared to horses in their tendency to "trot" rather than run. 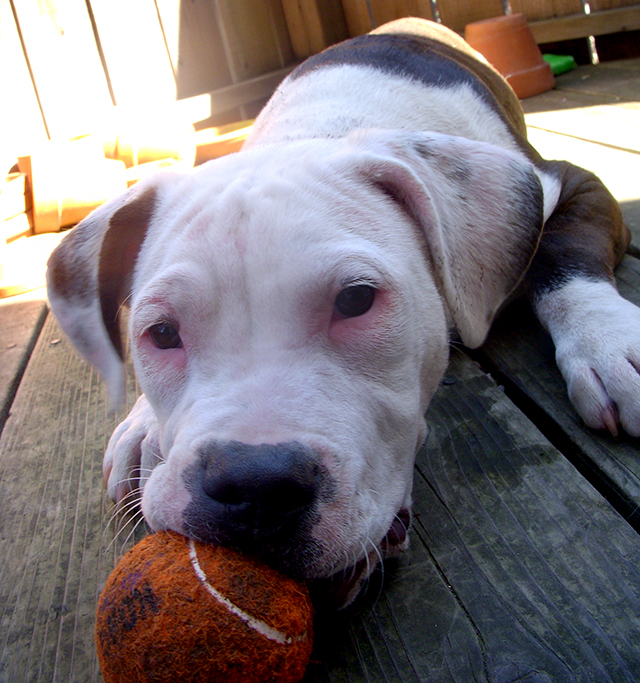 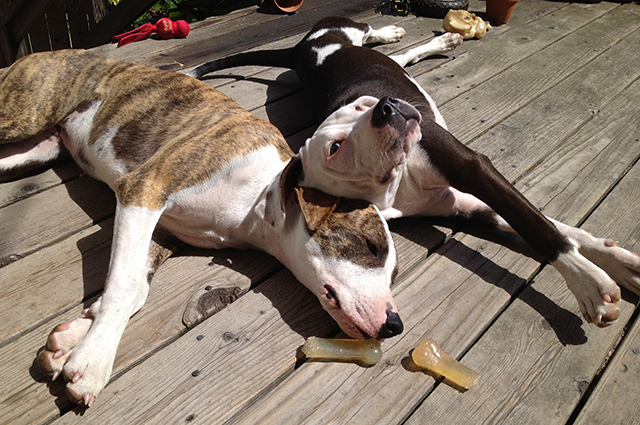 Enjoy dog sports such as flyball, agility, weight pull, tracking, and both rally and competitive obedience. - NO 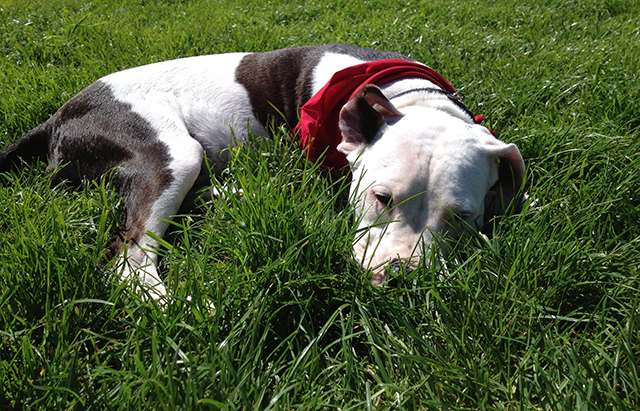 Respond well to a reward-based approach to training to reduce any stubbornness and to teach dropping of retrieved items. - YES & NO (Never had to teach him drop, he just does it. And he has never retrieved a thing in his life. He is anything but stubborn and he does respond to reward-based training.) 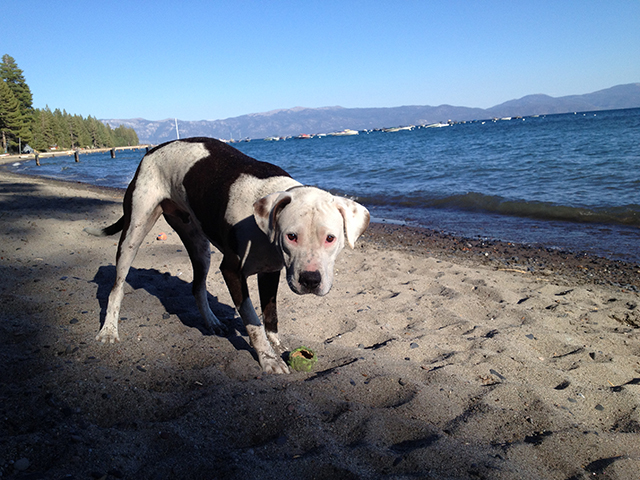 Some may be apprehensive around strangers. There have been reported incidents of Bull Terriers being aggressive with other pets or people. - NO WAY 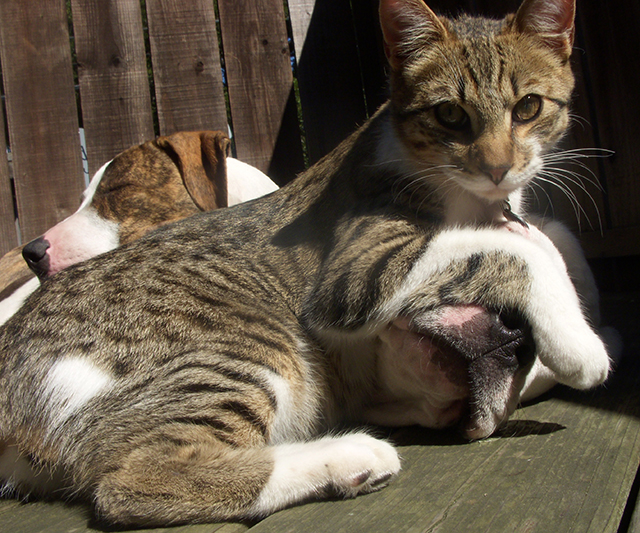 I also found some more similarities on Wikipedia:

The Bull Terrier is a fun, comical, people-loving dog. They are known to be courageous, scrappy, fun-loving, active and clownish.


Though the differences were aplenty too:

Bull Terriers can be both independent and stubborn and for this reason are not considered suitable for an inexperienced dog owner. A firm hand and an assertive demeanor are essential if the Bull Terrier is not to run riot. They are also fiercely protective. When it comes to other animals, caution should be advised. Bull Terriers have a strong prey instinct and can cause injury or death to other animals, especially cats. Introducing a Bull Terrier of the same sex as the dog in residence is considered unwise, and some Bull Terriers won't countenance any other dogs, of either sex. - HA!


I was really banking on Lab to be in his mix due to the fact that he is so sweet, gentle, fun-loving, forgiving, similar ears and head, longer hair on his back and not the sharpest knife in the drawer, but I guess not! 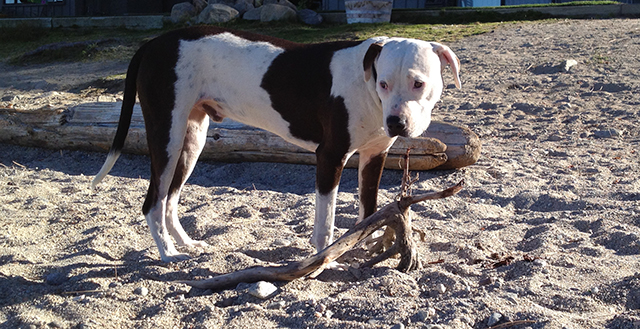 I can see the Vizsla in his ears and his narrower build, but I have known them to be hyper, intelligent and driven which he is surely not. In fact, I do not know why I did not think of it before, but I can definitely see Vizsla in Kaya. In fact, in almost all of the traits above, I would say yes according to her behavior. I sent in her results a few days later, so hopefully I'll get them soon! 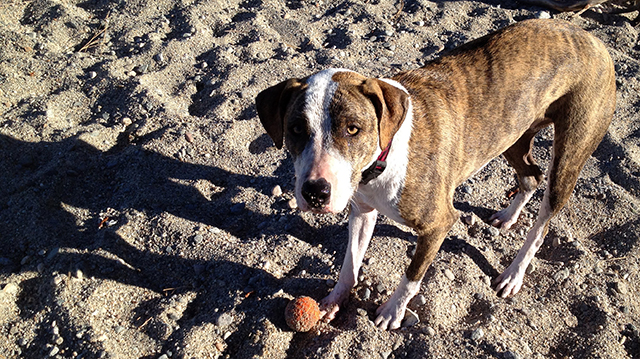 I guess his results prove the beauty of a mutt. Norman got the best of all his breeds and somehow missed out on their downsides. I couldn't have designed a better dog:) 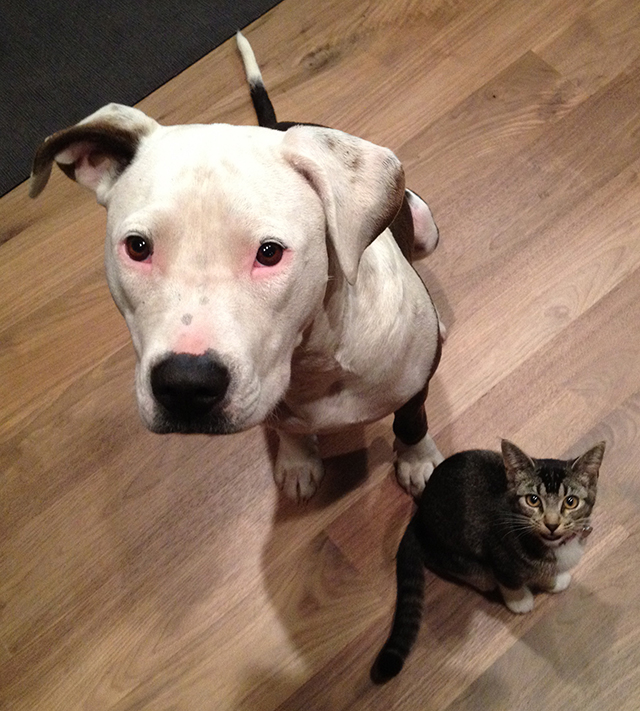