SWIMMING AND COUSINS AND TENNIS BALLS...OH MY!

Well...unfortunately my blog resembles that of a tumbleweed blowing down a deserted road lately. I've been busy house-hunting and along with work, the dogs, an unexpected trip to new york and family in town, there's been no extra time! Well, ok...I have made time to watch The Walking Dead and New Girl, but my internet time had been consumed by house-hunting. I'll go into that in another post. But one more change that's been going on is that my little brother (ok...he is not so little, but he is younger) has joined the Navy and he left for boot camp on Monday! We took a final hike on Saturday at a nearby lake and the dogs of course had a blast. Motlie's little wiener dog sister, Kaylie came along too!


Lastly, I asked my brother to get Motlie to do her wave. It is so darn cute. Kaya and Norman can sorta wave, but not like Motts:)

Luckily, the dogs didn't have to say their goodbyes yet because my brother's girlfriend will be in town for at least another 6 months while he is in training. We will still get together regularly so the dogs can have their crazy time. Then sadly, they will all be off to where-ever he is stationed. Naturally, I am bummed that they won't be around anymore(the dogs and the humans), but I am really proud of my brother and I just look forward to their return! It will be so weird to see the dogs' reactions when they re-unite after 4 years! 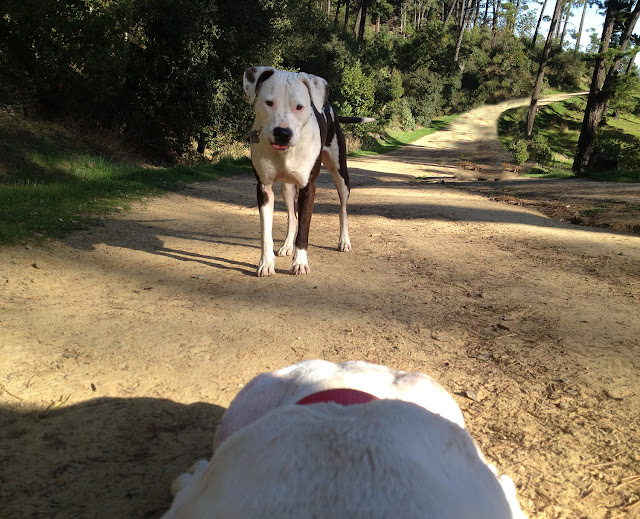