Norman is smitten...with the couch. He just can't get enough. 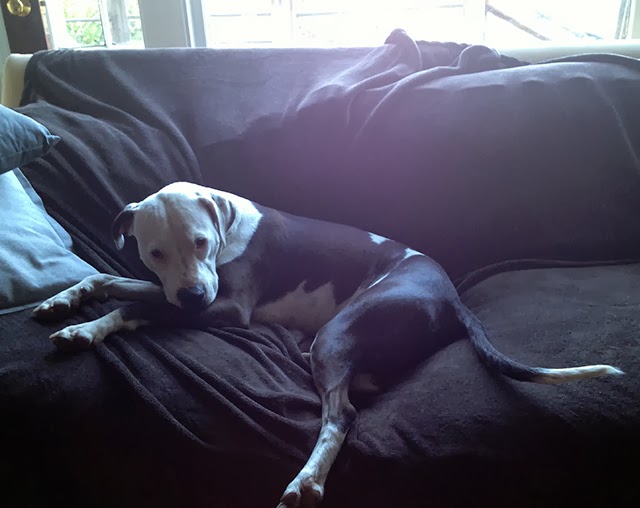 Granted it is a very comfortable couch. It's positioned under the window, it gets great sunlight during the morning hours and it's covered in a soft blanket. It even has a dip in the middle that he loves to slide his butt into. Norman has always loved a comfy spot but he really really loves this couch, as opposed to the other couches in his life, including the one on the other side of the room. 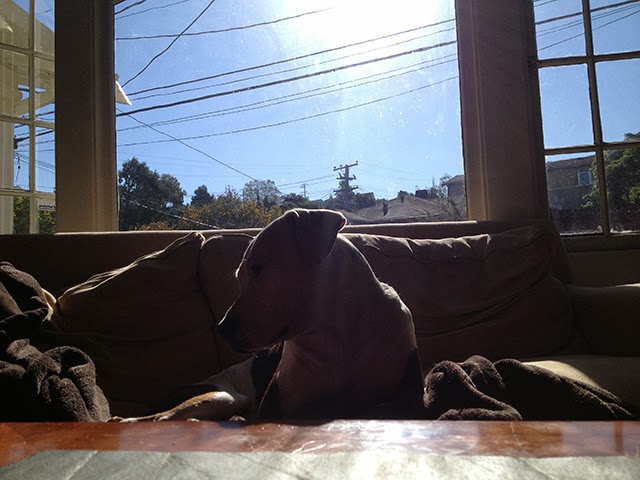 Sometimes he wakes up in the morning and while Kaya and Zoey are eager to go outside, Norman wanders upstairs and goes back to sleep on the couch. 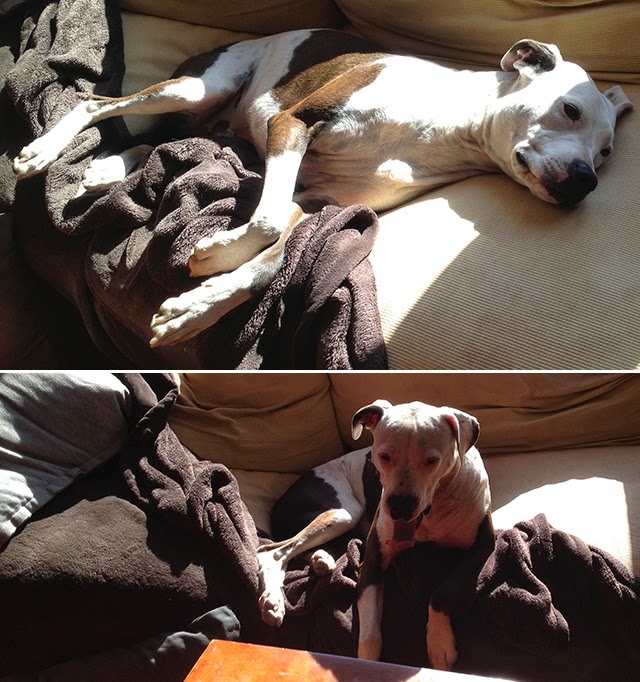 And as much as he loves to eat, sometimes he can barely get himself up and off the couch at dinnertime, even with lots of encouragement on my part. 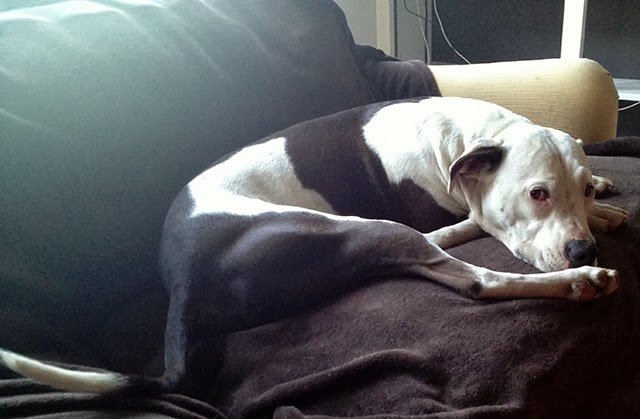 When people come over, he greets them happily, licks them and wags his tail at their feet but unless they continue to deliver cuddles and scratches, he goes and plants himself back on the squishy cushions and snoozes away while the humans mingle. 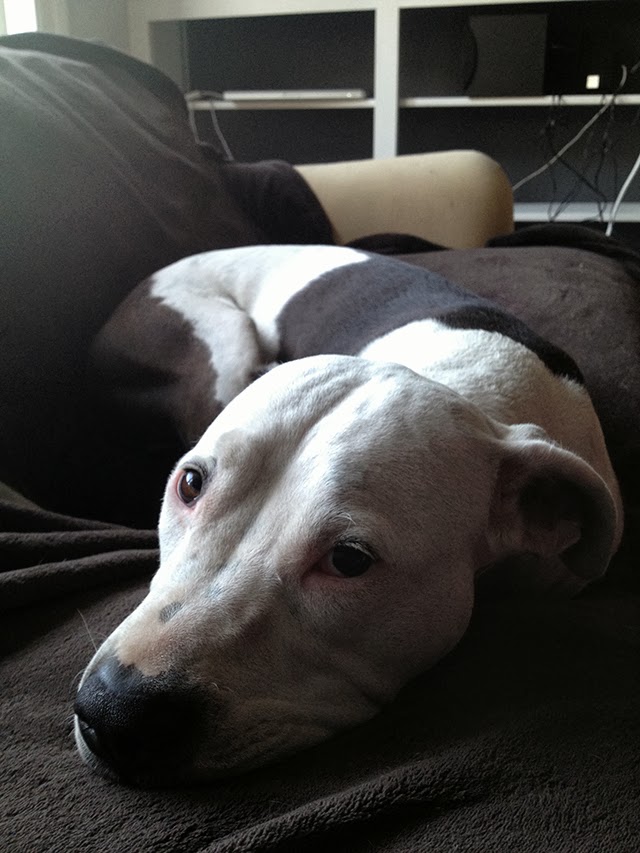 And after a long hot hike, Kaya likes to find a cool spot on the hard floor. But not Norman. No matter how warm he is, he makes a beeline for his beloved couch. 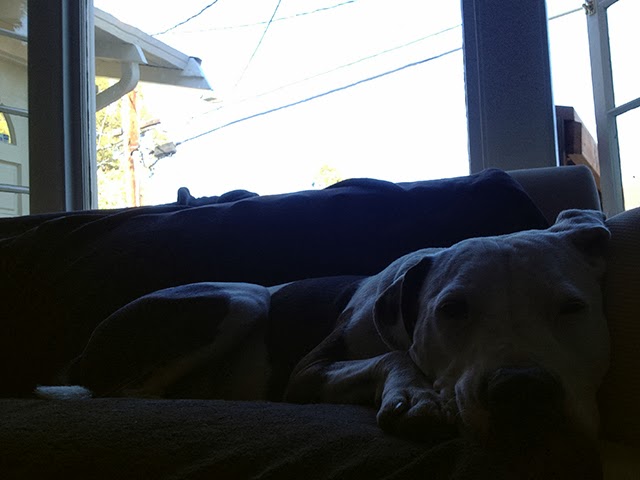 And every night it is a huge struggle to get him off the couch to come to bed. If I don't feel like calling his name a million times over like an excited school girl, I have to completely lift him up and off the couch to get him to relocate. And he lies there like a dead weight the whole time. I swear he can find a way to double his body weight when he's tired. Sometimes I shimmy his front end off and he'll stand there endlessly with his front end off and his hind end on.

And again, he won't budge until I clap my hands and call his name excitedly over and over. After he's safely removed from the couch, he stands there in a stupor, wondering how he was just in such a wondrous heaven and now's he's standing on the floor like a poor lost puppy. Again, I have to encourage him to follow me to the bedroom and I'd better keep checking behind me or else he may sleepwalk right back to the couch... 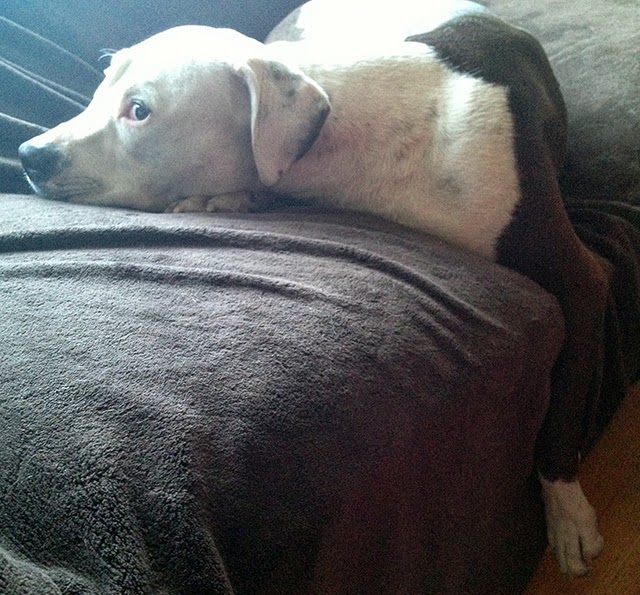 Though the other night, I made a surprising discovery. Norman and I walked into the living room together and for whatever reason, I decided to sit on the other couch. Norman walked around to his couch and looked at it and then back at me like he was asking permission. So I told him it's okay, good boy, go ahead. He looked back at the couch and sighed and then back at me. He was clearly torn or confused or something. Then he came over to me wagging his tail. His choice was clear. So I shimmied over and he planted himself next to me and then conveniently on my lap where my laptop once was. At least he still picks me over the couch! Just to proof it, he did the same thing again the next day.

Sometimes I am just too tired to make him get off the couch to come to bed at night so I just leave him there and I always wake up the find him on my bed in the morning. But not yesterday morning. I didn't get up 'til 9 and went upstairs to find him looking at me proudly on the sunlit couch.

I gave him a long cuddle and belly rub and left to make coffee, etc. He didn't get up until 11. That means he didn't feel the need to get up to say hi to the contractors who arrive at 7 (who he loves), he didn't get up when he heard the other dogs go out, he didn't get up after we cuddled and he didn't even get up to eat breakfast for an extra hour after I put it out! Silly guy...I think that couch has a narcotic effect:) 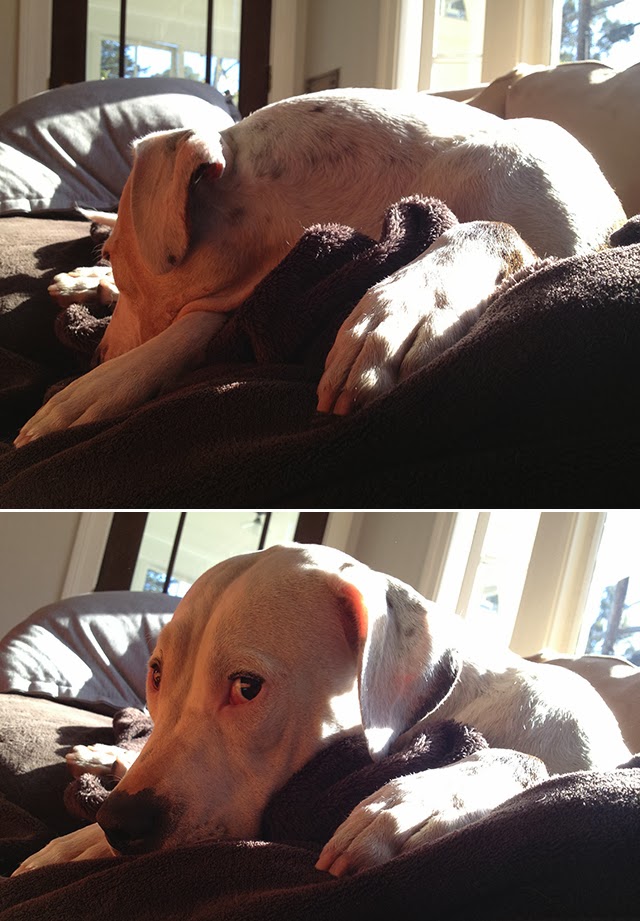 And to think, I was going to let my friend take it when she moved out because hey, it's kind of ugly and the cushions are sagging and the stuffing is coming out and it needs new upholstery, but then I thought to myself...Norman really loves that couch. And so it stayed...for now. 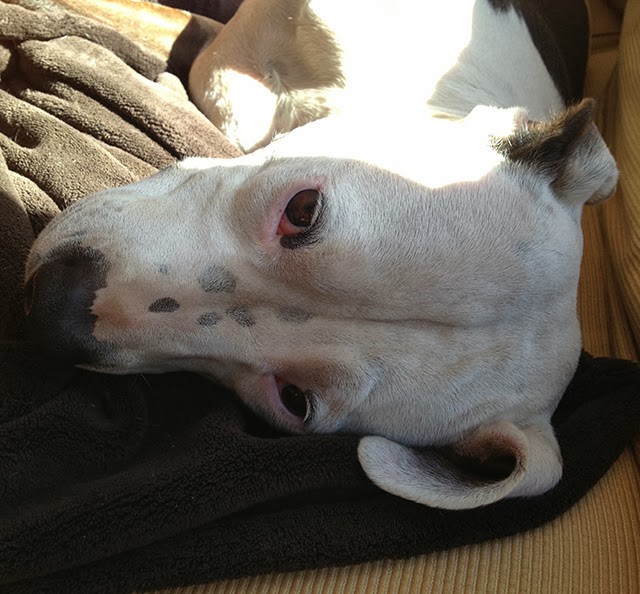 Does your dog have a favorite place to snooze? 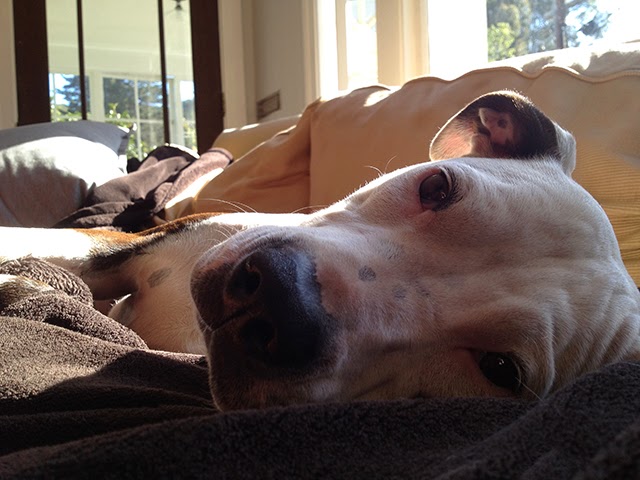 Related Posts:
Norman Switches Teams
Throwback Thursday: How We Do Labor Day
Sleeping In
Posted by Rachel @ My Two Pitties at 12:06 AM