As some of you may have read last week, I've been struggling to work with my friend on acclimating Sophie to our house. It's really a combination of her strong instincts, my sensitive kitty, our changing living situation and trying to get my friend to do the things she needs to with Sophie that's not working. So I had to come to a very difficult decision last week that it just wasn't working out. Though she was behaving fairly well on her tie-down, I felt that her prey drive was just too strong to trust around Gina in the long run. I think even if we got them to the point that they could co-exist, what about the day that Gina would play with her toy or chase a shadow across the room and Sophie would go right back to her instincts and Gina would be right back at square one. More likely, since she is an indoor/outdoor kitty, she'd just become a permanent resident of the neighbor's bushes to avoid all contact. This is basically what she has done in the weeks since Sophie's arrival. Even with Sophie in the crate, I have to carry Gina across the room to her food dish and she often comes meowing at the door but leaves before I get the chance to open it.


We tried giving her food and treats to reward her for being around Sophie but her nerves took over and she threw them up right away on several occasions. I try to remember that cats are a lot more primal than dogs and you can't really reason with them the way that you can with dogs. If her survival instinct is telling her to run and hide, that's what she's going to do. And there are so many big changes coming up for her. We are going to my parent's house for a month and then to our new house. Both places will be new and exciting for her and I'd hate for her to start out in total fear. It breaks my heart to watch my happy outgoing kitty that I have carefully raised from 5 weeks old to be social, friendly and loving to be in a constant state of wide-eyed panic.


But it also breaks my heart to ask my friend to let go of her dog. I know she's only had her for a few months but it's easy to become attached to a dog overnight. As I mentioned at the end of my last post, my friend said that she had been living with her friend and her friend's young son for a month before she left Colorado. When it was time for her to leave, they were desperate for her to leave Sophie with them. The little boy adored running around the house with Sophie joyfully jogging along behind him and my friend said that she never saw Sophie so happy and carefree. My friend was really on the fence about it but ultimately decided to bring Sophie with her. Though I had told her from the first day she brought Sophie home that it would be a gamble bringing her so far and if it didn't work out for everyone, Gina included, we would have to come up with another option. She agreed and said it was worth a shot. 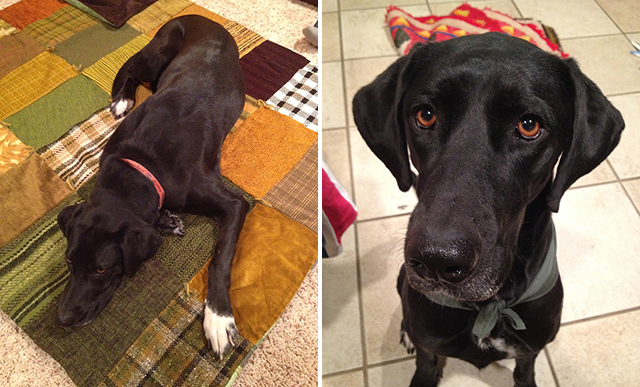 It took me a week to get up the courage to talk to my friend about it. Of course, it was one of the worst conversations I have ever had, but I tried to tell her that she did an amazing thing rescuing this dog and she would have a long happy life with her friend and she could always check in on her this way. I also explained that as much as it wasn't fair to Gina, it wasn't fair to Sophie either to always be on her case about something that is so natural to her. 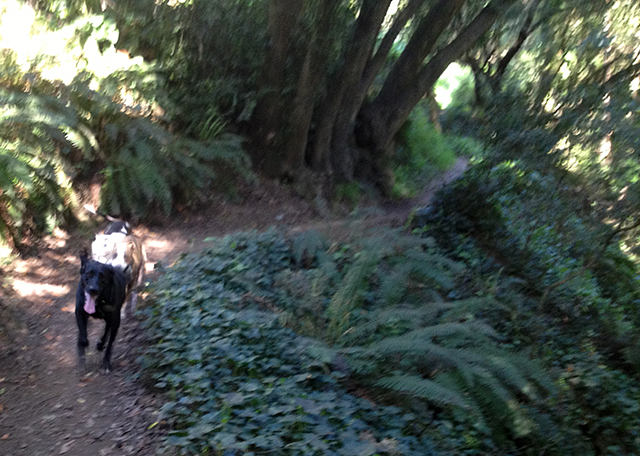 The hardest part was that my friend was really sure that it would be easier and better once we got to my parent's house because Gina will have to stay inside and this would, in a way, force her to get used to Sophie. I told her that it would actually be so so much worse because Gina has been there before and being kept indoors, she spends much of the day chasing her toys, frantically sprinting around the house and dive-bombing into boxes and paper bags to keep herself busy. Plus the whole living space is open plan and so there would be no way to separate them unless one was in a bedroom. With bad separation anxiety, I don't think Sophie would cope well with that. She doesn't even like being on the other side of an open door from you. And in all reality I think Gina would just choose to spend the whole time under a bed or in a corner anyways. Maybe if Gina was a tougher cat and would just turn around and swat at Sophie instead of running away, things would turn around, but that's just not her.


After all that, we were quiet for a while as I let her think things over. After a few minutes, she looked up at me in tears and said that her friend had responded to her text asking if she'd still want Sophie and she replied that she'd be more than happy to take her. After the initial shock of it all, I think my friend handled it really well and although the next couple days were bittersweet, I think she felt too that it was the right thing to do for all of us. I could be all wrong, but I feel like at least subconsciously, her resistance to committing to a training and exercise schedule with Sophie was her way of dealing with being overwhelmed by the whole thing including financially, time-wise once she would be working full time and trying to get her behavior to change so drastically to live with a cat. I really think she loved the idea of having a dog, of getting kisses and cuddles(which Sophie was not actually into), of being greeted when she got home and of going on a nice bike ride or hike once in a while, but was not ready for the actual day in and day out responsibility. 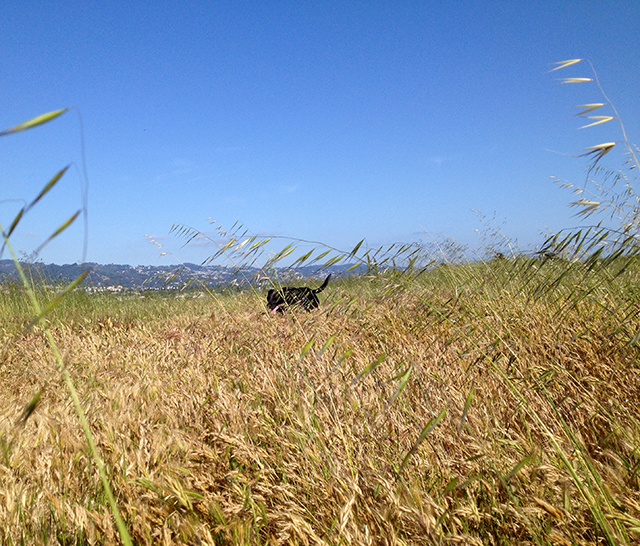 I also know that she loves this dog and wants only the best for her and I know that feeling of wanting so badly to save a dog and make sure every day that they are safe and happy. It really reminds me of my experience with Shaka. I wanted so desperately to keep her forever and once that dream was crushed, I was devastated. I felt like I had failed her and she would never feel confident in another home. But once I found her forever momma, it was such an amazing feeling. I watched with pride as she walked away, knowing that she was on her way to a lifetime of happiness and I had a hand in that. I also felt relief that the time, expense and worry that she brought me every day was lifted. In my heart I wanted to keep her but in my mind I knew it was too much for us. I told my friend the whole story and I think it really rang true with her.

So even though I offered to make airplane arrangements to fly Sophie back to Colorado, my friend took the initiative and found her a ride with a friend of a friend driving back there 2 days later. And once Sophie was there with her new family, I saw this most tear-jerking post on my friend's facebook wall by Sophie's new momma:

Ashley: Meet Sophie the Adventure Dog! The newest member of our little family ❤ My heart is happy. 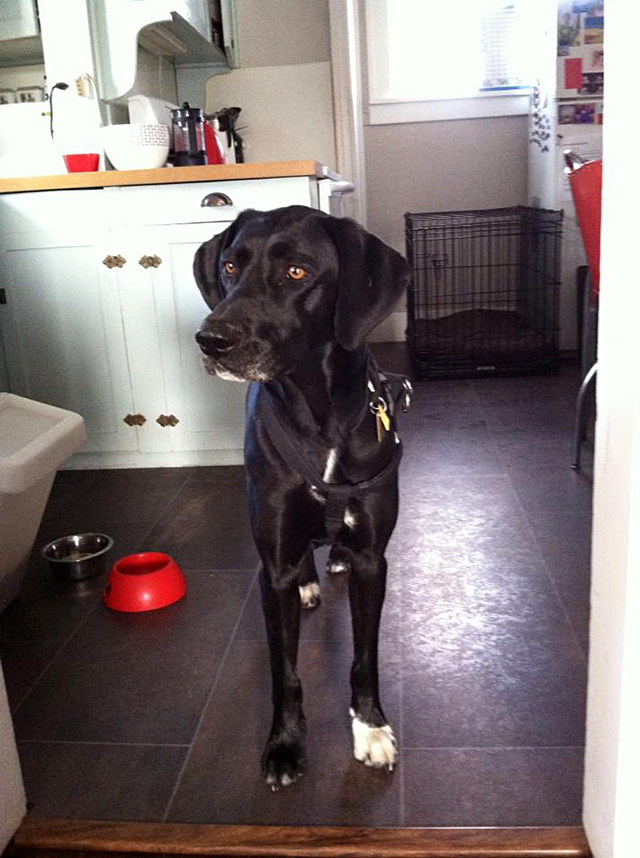 John: Is she Hyper?

Ashley: No John, she is perfect! So well behaved, very chill, but happy to run around the yard and play with Trevor. She's a dream :)

Jen: This made me cry. Black lab mixes are my weakness. ❤

Ashley: Well I'll bring her over so you can meet her Jen :) you will fall in love.

Ashley: We should introduce them so they can be friends

John: The reason I ask is that I had a friend who had a small lab, & she was really full of energy!

Ashley: John, I had a yellow lab years ago who was also FULL of energy. Sophie knows when to play and when to chill. I'm tellin' ya, she is the perfect doggie.

This conversation really made me think, as much as we want to believe we can train each and every dog to be the dog we want them to be or even need them to be for our situation, sometimes it's unfair to ask them to live a life of feeling like the are always doing the wrong thing for following their instincts. Every dog is the perfect dog for someone. Sophie will always be a good girl now and that little boy will grow up loving a dog and as for my friend, she is doing very well with it all. It helps that she truly loves the company of Kaya and Norman, soaking up their daily doses of kisses and cuddles. 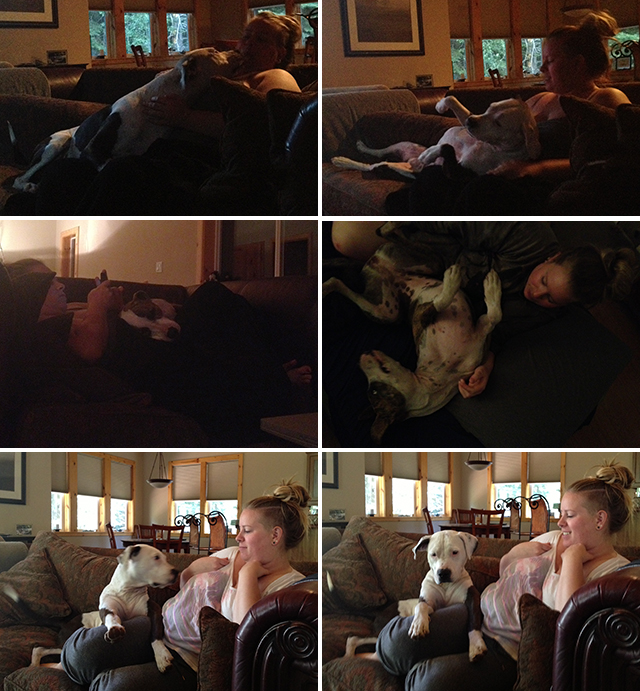 Another way I knew that I made the right decision was when I had to go out for a few hours after Sophie left and when I returned, Gina sat on the fence meowing away to say hello. At that moment I realized that she had not done that once in all the time that Sophie was here. And there were so many little things that came rushing back to me as soon as I walked up the steps and she reminded me that she had stopped doing. She gave me her trademark greeting by stretching up my leg(no claws) and tapping her paws as high as she could reach 'til I picked her up and gave her a pet, some scratching and a kiss while her kitty motorboat turned on all the way up. I put her down and she pranced through the door and jumped onto Norman, purring away and once again attempting to nurse from his lips. Then she jumped down, rubbed back and forth on my leg, begged for some snacks and darted across the room after her toy. Once I sat down, she planted herself on my lap, purring away and got lots of face scratching in. After that, she must have slept for a least a day in her favorite spot curled up between Kaya and Norman. And so now that Gina is back to her old self, my friend is getting to know her really well and is getting a huge kick out of her silly ways. Gina also now gives my friend her trademark greeting:)

It is such a nice feeling to know that my friend is not going to hold any of this against me, the dogs or Gina. I know now that our friendship is strong enough to overcome a difficult situation like this and I really value that. And thanks for all the great advice and support you guys gave me in my previous posts. Even though it didn't work for Sophie to stay in our home, she really learned a lot in a short time and I think it'll really stick with her. I learned so much and I'll definitely refer to your suggestions for future dogs we might have in the house!

Related Posts:
Sophie Girl
Do I Take You for Granted?
Wordless Wednesday: At the Park with Sophie
Posted by My Two Pitties at 1:42 AM