A THING OR TWO I LEARNED FROM SHAKA

We often hear, "it's the person not the dog,"or "it's all how they're raised," when it comes to pit bulls. And while it's true that a dog who has spent it's entire life in a backyard or tied to a chain is more likely to act out, it downplays the fact that so many of these dogs that are abused and neglected get right up and move on to a beautiful life.

I have known all along from reading and hearing stories that these dogs can make great companions, service dogs, athletes and family pets, but with Shaka I got the privilege of experiencing it first hand. She taught me that sometimes it really doesn't matter how badly a dog is treated or what dire circumstances they came from, they will remain kind and loving because that is their natural-born way. 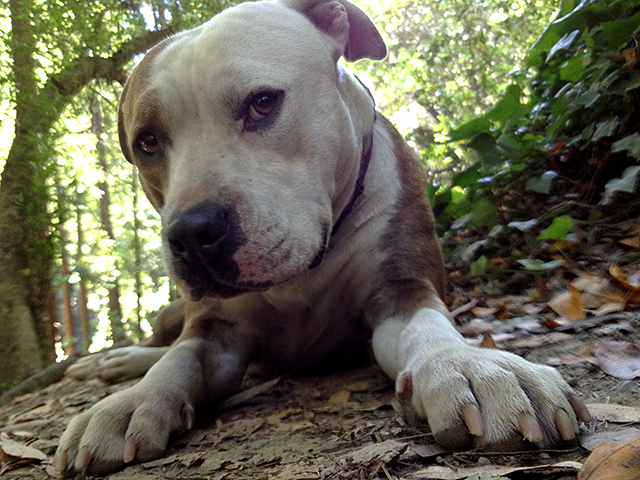 I'll never know for sure what or where she came from. All I know is that when I brought her home she was thrown in the mix with myself, 2 dogs, a cat and a baby kitten in a studio apartment. She ate her dinner with not a care in the world that she was surrounded by the rest of us and then she planted herself on the couch like she had been with us all along, with a look of pure contentment on her face. 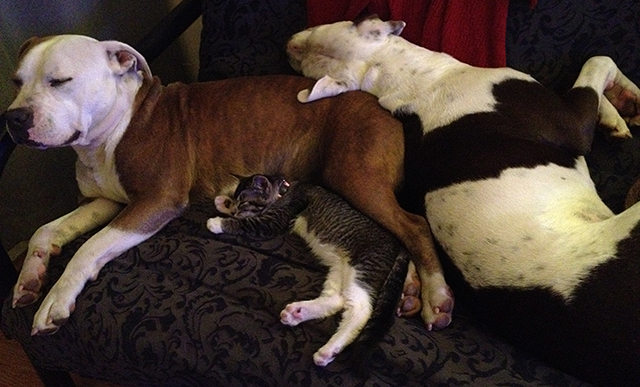 It took her at least a week to lick me on the face the first time. From then, she only did it once every few days. Almost every time I got one of those precious kisses from her it was first thing in the morning. She'd always wake up super happy and wiggly, but it would only last a minute or two at most. In order to give a kiss, she always had to copycat Kaya or Norman to get up the courage. Other times she would come close and back out at the last minute. And she always just give one lick and then turn away in shame, all the wind let out of her sails. 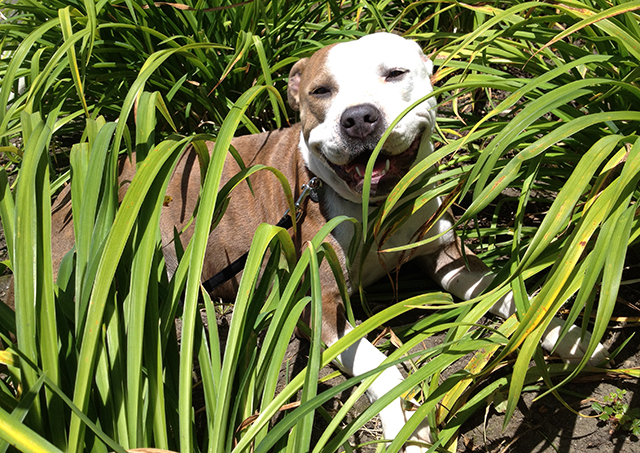 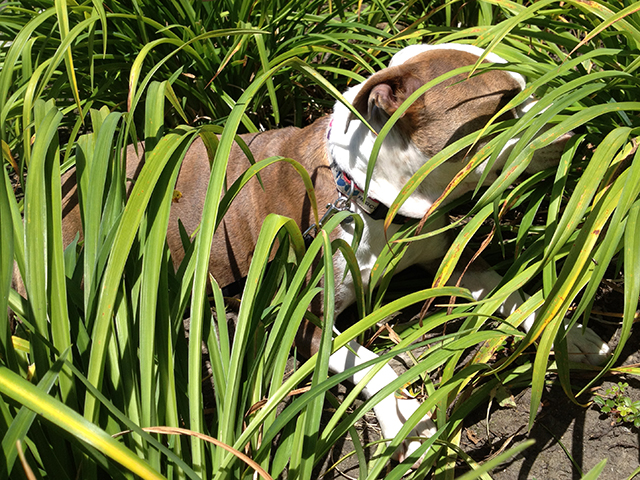 My friend who I found her with, said that many people in the area get pit bulls to be guard dogs. They leave them mostly outside (this would explain why I often found her standing on my coffee table at first) and they punish them for being affectionate (this would explain her fear of kissing even though she clearly wants to and then turning away after she does it.) 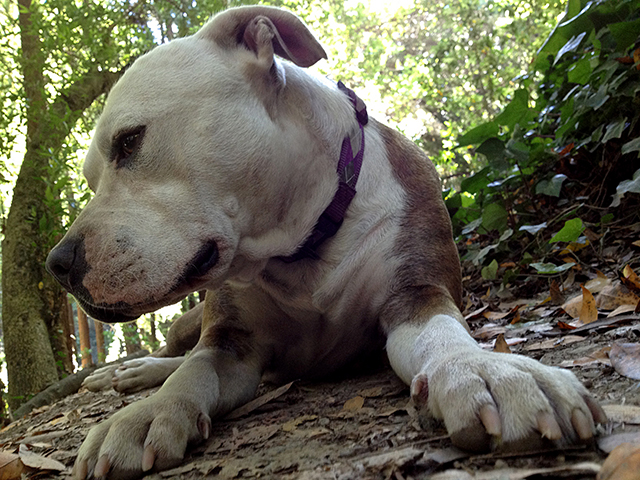 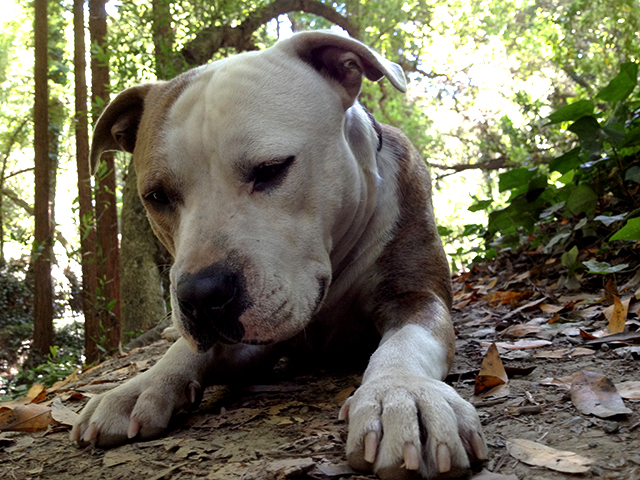 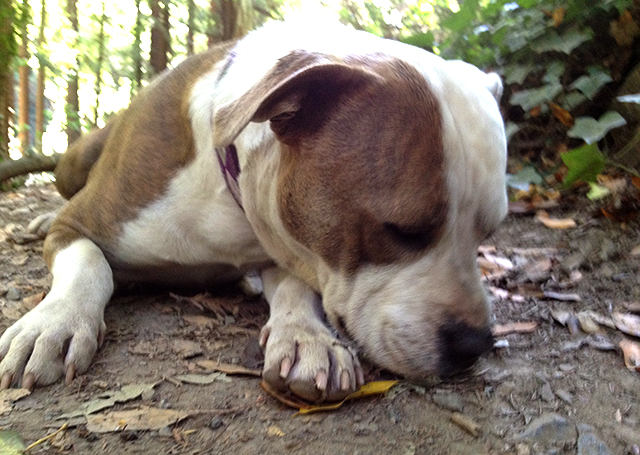 I am also positive that she was a complete failure as a guard dog. She is very calm and easy going by nature, probably the least reactive dog I have ever met. She never barks, growls or even stares at anything through the fence at home or out and about. She is sweet and kind to every person, dog and other living thing. All she wants to do is plant herself next to you on the bed or couch. And her biggest fear in life is being left alone, even for a second. 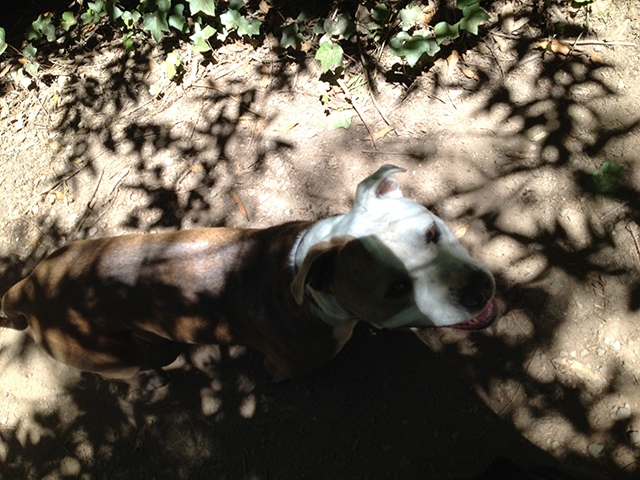 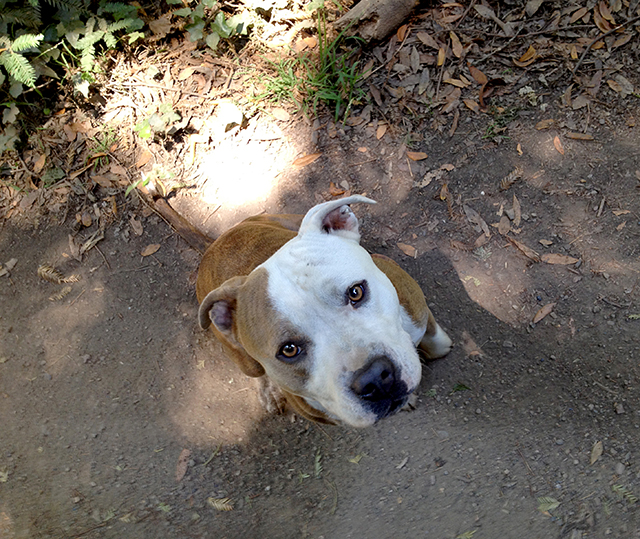 Shaka was not raised right, but she just waited it out until she got the chance(or just finally decided) to take a little walk and run into some new people. I still am not sure if she would have come up to me if my dogs were not there. She immediately recognized them as the link to know that we were safe people. 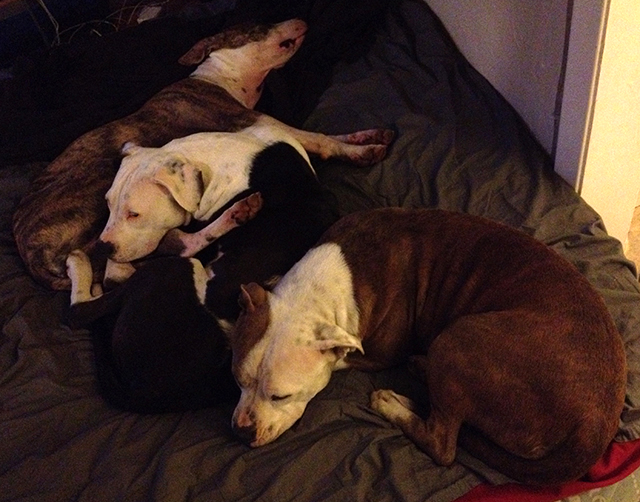 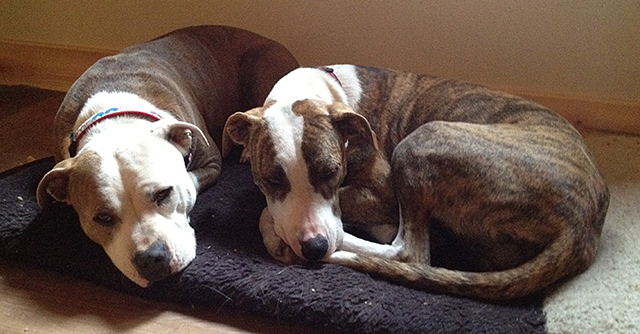 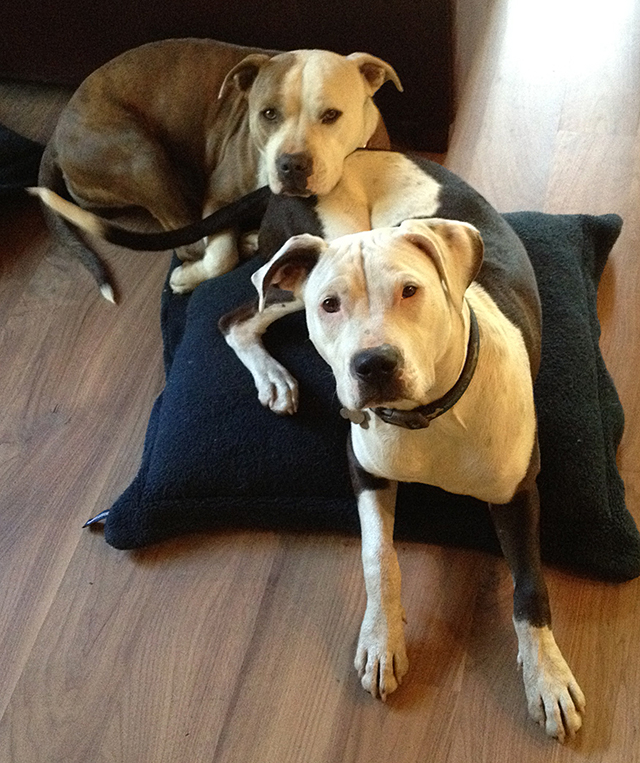 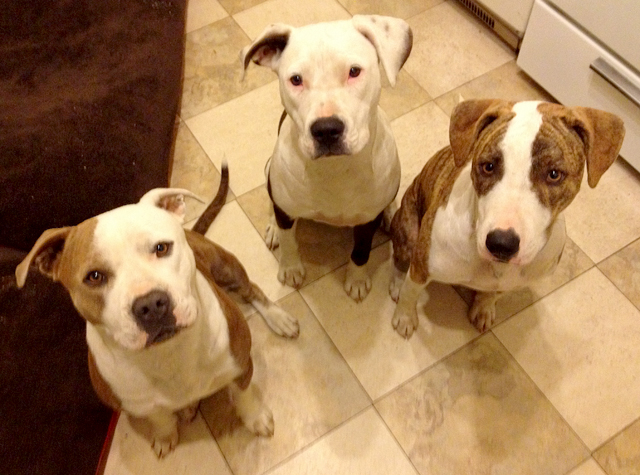 She also taught me what is was like to earn the trust of a dog and encourage her to enjoy the world. I learned to really appreciate the little things like the puppy-like joy she would show when I'd grab the leash and her willingness to catch up on learning all the things she never knew, plus those few and far between kisses. 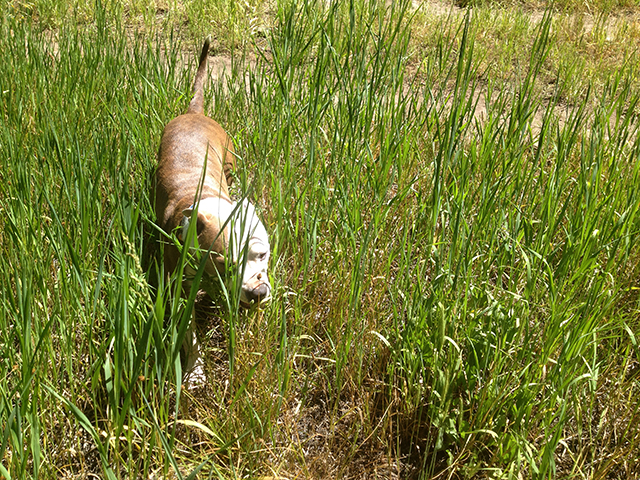 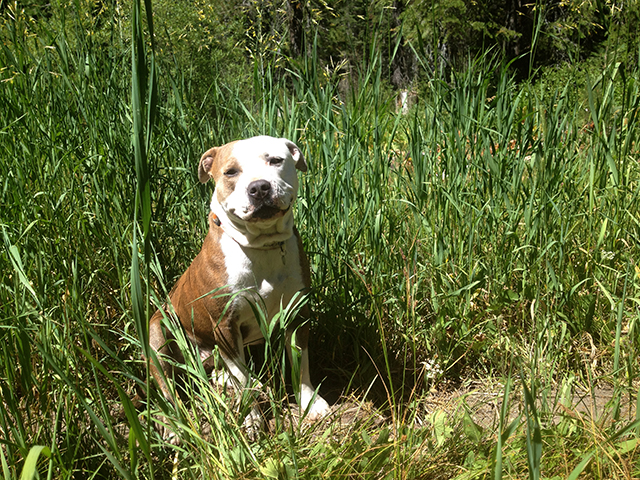 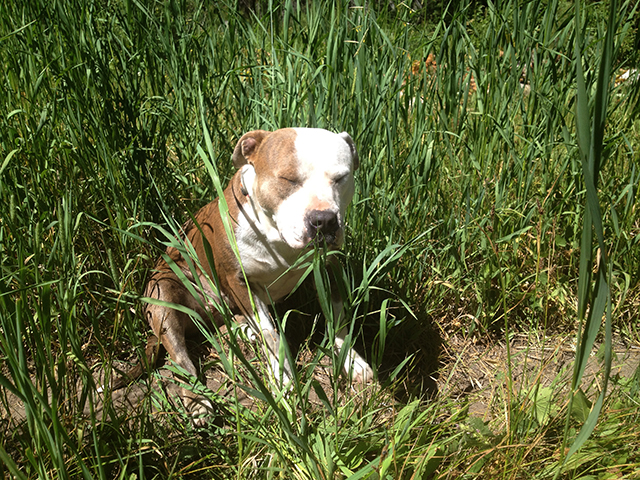 During one of our training sessions, I decided to practice something with her that I commonly did with my dogs to teach them a solid down-stay. With them in a down position, I'd step towards them so that my foot and leg were touching their side, step over them, walk around them and do it again in many directions. When I first tried to do it with Shaka, as I stepped towards her, she had a look of terror in her eyes and bolted to the corner of the room. I lured her back to the center of the room with fresh chicken and tried again. This time I removed my shoes and I held a big piece of chicken in her mouth and let her nibble at it to keep her comfortable, while I slowly tried again. She picked it up quickly and lost the worried look in her eyes after several repetitions. But I can't imagine what was running through her mind the first time I approached her. She's not a naturally skittish dog, but was terrified of my foot coming towards her. 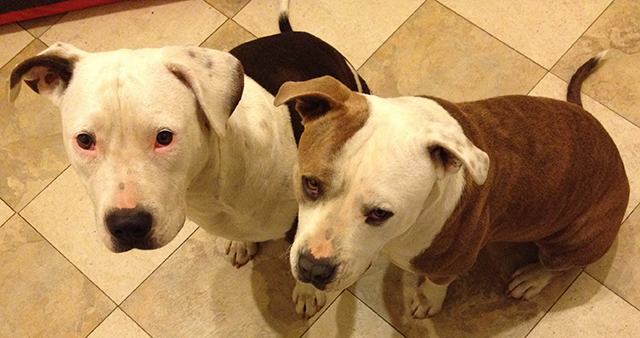 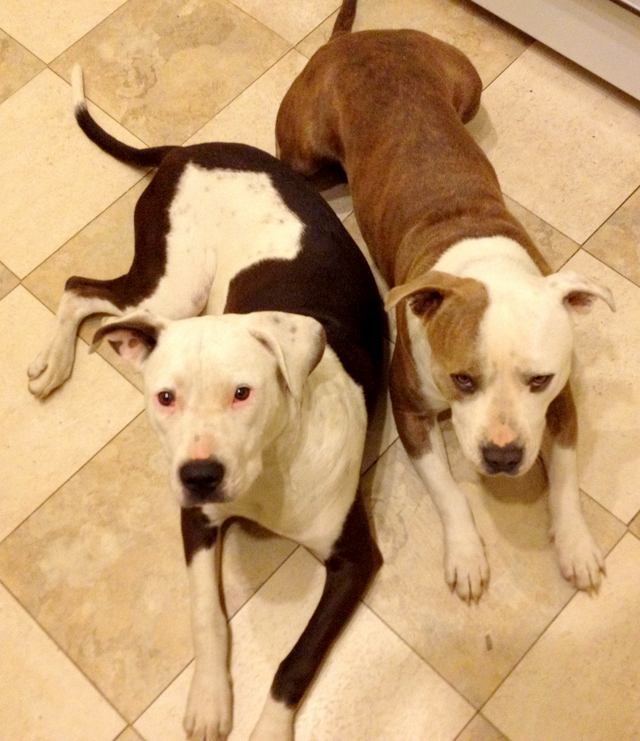 At only a year and a half old, this was most likely how her life started from puppy-hood, but I am so glad and so proud of her for being a failure. A failure at succumbing to the wrong hands and the purpose they had in mind for her. She wrote her own future every step of the way. Good girl Honeybee. 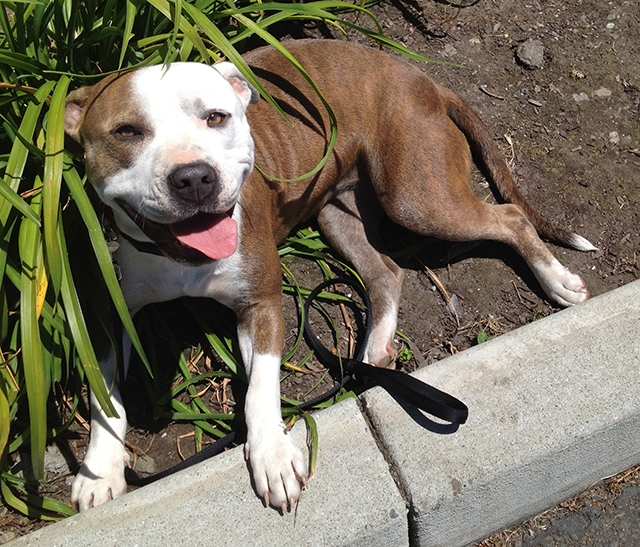 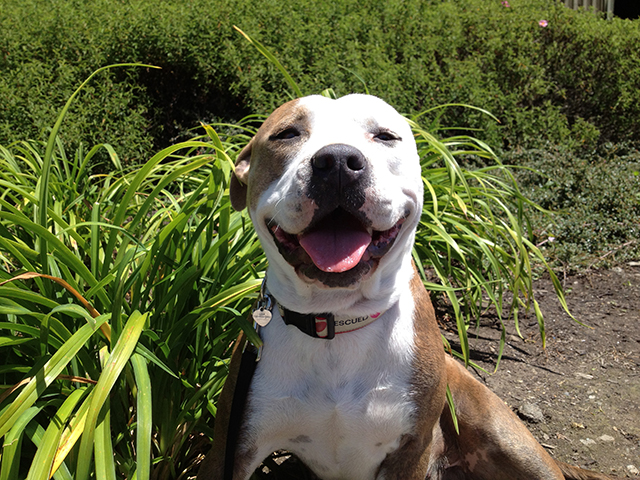